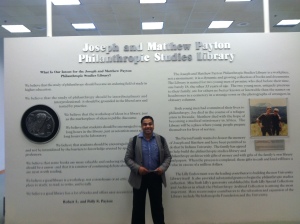 This is the first in series of “conversations in philanthropy,” posts that I plan on writing, during my stay here, throwing light on some aspect of the field of Philanthropic studies. In this post, I will try to give a big picture overview of how philanthropic giving has changed from last year to this year, based on Giving USA 2013 report and some insights into religious giving in the U.S.

I have already had some deep, insightful conversations with many people here covering philanthropy in religion, fund-raising, and also individual philanthropy. The research team here takes a “big picture,” view of philanthropy and studies it comprehensively. Some of the most impressive projects that I have come across are in the realm of trying to understand philanthropy in the context of larger societal discourse and also individual changes in behavior. My colleague Daniel, for instance is studying whether the ‘U-curve theory’ of philanthropy is true. i.e., that poorer people give more in philanthropy as compared to the middle class, in proportion to how much they earn and this percentage drops, as one’s income level increases.

Giving USA 2013: The Giving USA Foundation and Lilly School of Philanthropy released Giving USA, the annual report, which takes stock of the field of Philanthropy in a “big-picture,” perspective. Here are some key findings of the survey, which uses data from Internal Revenue Service, other sources that publicly report giving and aggregates this information. This is the most trusted and comprehensive survey of giving in the country and has set a benchmark for reporting philanthropy. For more on methodology of how Giving USA compiles its data, look here.  Here are some key findings for this year:

The U.S is considered one of the most generous societies in the world, with very high levels of giving to civil society organizations. This goes back to the days of the founding of the country itself, given that there was suspicion of the government and also high levels of ‘self-reliance,’ among people to solve their own problems. This, has arguably continued and to this day, shapes the cultural landscape of giving in the country. The Charitable Choice provision of 1996 and subsequent neo-liberal policies that have sought to reduce the role of government has markedly increased the demand for social services and hence, there has been an increase in the number of nonprofits. The sheer expansion of foundations is staggering, considering there are over 75,000 foundations operating in the U.S today.

Individual giving is still very high in the U.S, as Giving USA 2013 points out. But the debates in the U.S today center on the role of the state versus individual action. This is not entirely settled, despite best efforts to find compromise, with the political parties espousing diametrically opposed views on issues such as Medicare and Medicaid, Social service provision etc. For more reading and in-depth analysis of who gives, to what and why, check out this paper by Schervish et al.

Religious giving: What does the future hold?

The U.S attracts an enormous amount of money towards is religious institutions and faith-based organizations. Giving to religion was virtually flat (a -0.02% decline) with contributions estimated to be $101.54 billion. Giving to religious organizations (mostly local houses of worship) represents the largest share of U.S. charitable giving at 32% in 2012. This is not surprising, given that congregations are disengaging with the church and there is reported drop in church attendance. This could also be a case where faith-based giving is on the rise (those not overtly religious, but inspired by humanitarian principles-which one could argue are rooted in faith). A classic case is Heifer International.

Given that religious institutions have witnessed a drop in giving (from about ½ of all giving a few decades ago to about 1/3 now) there are lessons for church and congregation leaders here, as well. The first could be to engage with the congregation more deeply, to utilize online fund-raising (Dr. Tim Seiler, the Director of Fund-raising school informed me that churches are considered to be lagging behind in technology adoption) and also focusing on the untold needs of the congregations. The biggest insight that I got into this segment is when he said that the pastors are perhaps not talking to the right people, and making appeals to those already giving – rather than reaching out to those who are free-loading.

Philanthropy is well and alive in the U.S and this is corroborated by the research in Giving USA 2013. It is undergoing a shift, albeit slowly and this is taking the shape of more partnerships, between foundations, private enterprises and faith-based and religious groups. Perhaps this is an indication of the changing needs of society and also how people are responding to these needs. Or perhaps, it is a reflection of desperately trying to fill in gaps that the state has left open – given the budget cuts and sequestration?